A BLE-enabled Dust Detector with Arduino and nRF8001

Update: A self-made dust sensor of mine is documented here, as an alternative to the Sharp dust sensor below.

This article is a follow-up of a previous post on making a Sharp dust detector work with Arduino. Here I add a Bluetooth Low Energy (BLE) interface so that I can use a smartphone to access the dust detector output rather than an Arduino serial console.

Bluetooth 4.0, also known as Bluetooth Low Energy (BLE) or Bluetooth Smart, is gaining lots of attentions recently. It is marketed as a very low-power protocol that is designed for low-power devices (e.g., sensors) that can function months or even years merely with a cell battery. Explaining this technology is not the main topic here. However, I do find Heydon’s Bluetooth Low Energy: The Developer’s Handbook to be a fantastic reference (I highly recommend this book for all levels of developers). And Getting Started with Bluetooth Low Energy: Tools and Techniques for Low-Power Networking also has some good examples of practical development for beginners.

Nordic’s nRF8001 is an IC with BLE stack programmed inside, and needs a microcontroller to work together. It uses a propietary but also well documented application controller interface (ACI) to interact with a microcontroller (which is Arduino in this case) through a modified SPI link. The nRF8001 breakout board used here is mostly built around the Nordic’s nRF8001 reference design (see Figure 21 in its datasheet) plus a logic level shifter (HJ4050 from TI) on the SPI pins (SCK, REQN, MOSI, MISO, RDYN). That is because the logic high is 3.3V for nRF8001 but 5V for Arduino. More information about nRF8001 is available in its datasheet.

I draw a block diagram as shown in Figure 1 to help understand how nRF8001, Arduino and smartphone work together.

In plain English, nRF8001 is the hub where Arduino and smartphone exchanges information. In BLE speak, the smartphone client will be notified once the TX characteristics get updated on the nRF8001 server (new data from Arduino via ACI), and the data will be pushed from nRF8001 to smartphone. In the other direction, smartphone can also send data to nRF8001 (updating the RX characteristics), and nRF8001 notifies and sends the data to Arduino.

Figure 2 shows the circuit wiring. The part related to the dust detector is the same to the previous post. What is new are the pins connected to the nRF8001 breakout board as follows:

Part of the heavy lifting in software has been done by the friends from Adafruit as they publish Adafruit-flavored nRF8001 Arduino SDK on Github here, which, I believe, is based on Nordic’s BLE SDK for Arduino. Download the SDK, and install it as part of Arduino library by following this instruction.

A great part of the code below is derived from the echoDemo example. It pushes what is read from the amplifier output to nRF8001. Note that the code works for Arduino Nano and Uno. It may need slight change for other Arduino flavors. The code below is released under MIT license. Giving credits by linking this post in your work is very much appreciated but not required.

One needs a BLE client on smartphone to test the functionality of the circuit. First check your if your smartphone has BLE capability. Download an app named “nRF UART” from Google Play or App Store.

Open the app, click “Connect”. One should see the RX values being pushed to the smartphone once get connected. One should get something like in Figure 3: 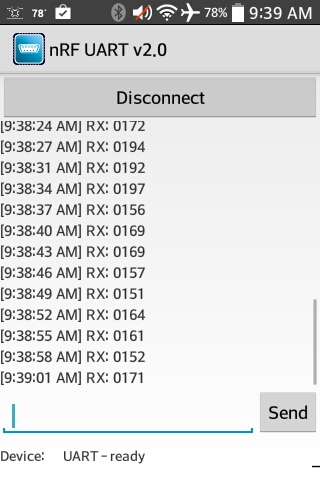