A Simple Dust Detector on Arduino

This article documents how to make a Sharp dust detector work with Arduino. The data related to dust density can be read from an Arduino serial console.

The datasheet has a simple circuit diagram below (Figure 1) that explains the working principle quite well. 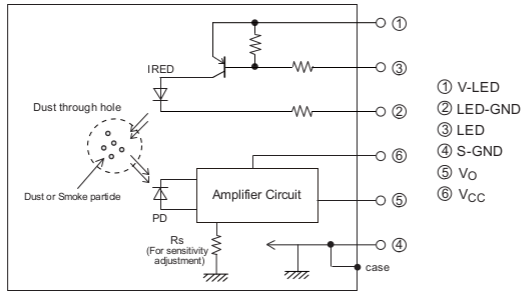 This sharp dust detector senses the dust optically. First, the infrared LED shines the test space with an infrared light pulse. The photodiode (PD) collects the scattered light by the dust, and converts the light into photocurrent which is further amplified by the transimpedance amplifier. The output voltage from the amplifier is positively correlated with the scattered light, thus the dust density in the test space. The resistor Rs is probably the feedback resistor determining the sensitivity of amplifier.

There is extra subtlety about the shunt capacitor between the Node 1 and the ground, as indicated by the figure from the datasheet (Figure 2):

Figure 2: The capacitor is needed to make the whole thing work. Similar idea can be seen in some other circuit such a short pulse generator using an avalanche transistor.

where R=150 Ohm and C=220 uF, V0 is the Vcc voltage (5V). Note that at t=0 (the moment BJT is turned off), the charging current is V0/R. Therefore larger R yields smaller peak current (which is good if this thing is power by a battery), but longer charging time.

However, it is still not clear to me the use of the resistor between Node 1 and 3. Maybe other people can shine some light.

Figure 3 shows the front and back side of the dust detector after a teardown. On the front side, one can see a BJT near the top, and another IC below which is probably the amplifier. On the back side, the LED and PD are in the two corners. There seems to be lens in the LED and PD packages for focusing purpose. Also the dark color of the PD indicates it is solar-blind, meaning there is a filter removing most of the visible light so that it is less vulerable to the ambient light inference. 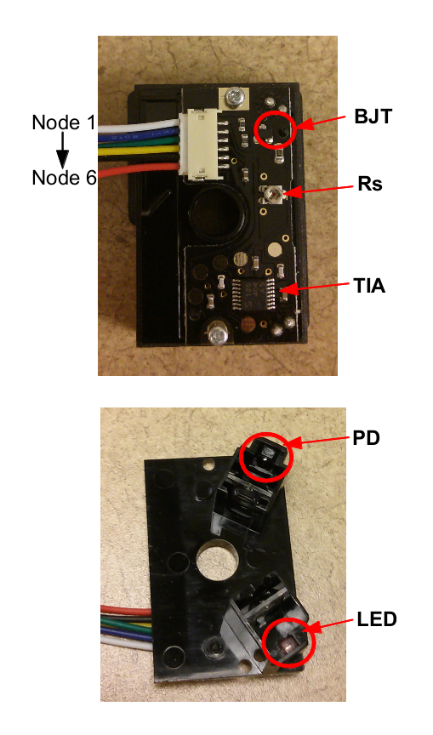 Figure 3: The front and back sides of the Sharp dust detector.

From the datasheet, the stimulus voltage timing (at Node 3) is as follows (Figure 4): 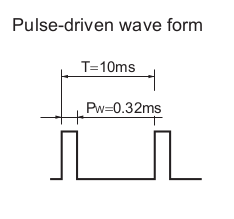 And the voltage output should be read 0.28 ms after the rising edge of the stimilus voltage.

In my implementation, the six nodes in the above circuit diagram are connected as follows:

The Arduino source code is as follows:

The ADC of Arduino is 10 bit reference to 5V. The read will be between 0 and 1023, with each unit equivalent to 4.9 mV (see this reference). The ADC read can be reflected in the Arduino serial communication console.

The circuit wiring is shown in the Figure 5: 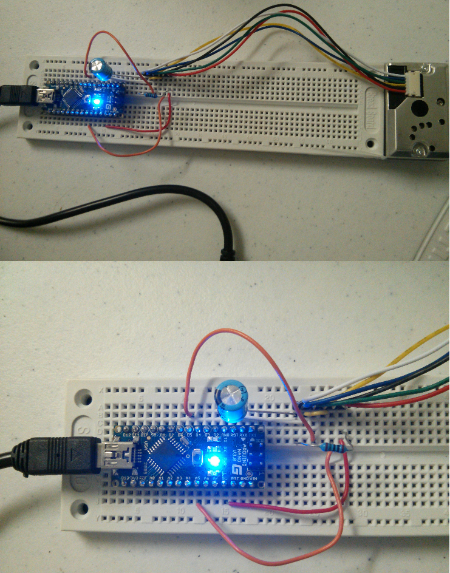 I find a burning incense stick can be a good dust source for quanlitative testing of this circuit. Incense sticks can be purchased in some Asian grocery stores.

In a clean air condition, the ADC mostly reads between 120 and 160 (a large variation). This is probably the background signal plus the voltage offset from the amplifier itself. When the device is exposed to a burning incense stick, the number shoots off and saturates at 750 (equivalent to 3.66V). So this circuit works. However, the quantative relationship between the dust density and output voltage needs more comprehensive test with calibrated dust source.

I also use an oscilloscope to measure the amplifier response upon the pulse excitation of Node 3 in clear air condition, which is plotted in Figure 6. The raw data and the plotting script (written in Python) are available here. One can see the amplifier output increases as the voltage on Node 3 goes to digital low, and the rise time is what is expected (RC time constant less than 1 ms, explained in the first section “Working Principles”). 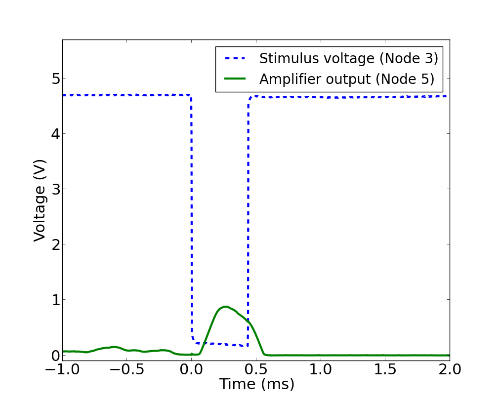 One problem about this circuit is it draws lots of current, about 90 mA tested by my current meter. I think it has something to do with the shunt resistor between the base and Node 1 of the BJT in Figure 1. A redesign of the LED driving circuit can solve this problem.